skip to main | skip to sidebar

Yep, this is my third post today. Not that I have nothing else to do of course, but I just had to get in on this fabulous contest that Cammie
has going on. I am sure everyone knows the story, but if not, Cammie lost her Grandmother in June from complications due to Alzheimer's disease. So for National Alzheimer's day, she asked everyone to make a thank you card and to give it to a caretaker that has cared for someone with Alzheimer's. And oh, this was so easy for me to do because I knew right away who my card would be for. Up until a few weeks ago when my MIL received her own bad news, she was a nurse and has cared for many patients with Alzheimer's. She always speaks so highly of her patients and has always treated them with both love and respect.

Her favorite color is blue, so I chose this pretty paper from Imaginisce called Drapin Daisies. I tried to mimic the daisies by adding a white sting of cotton and used my SU flower punch for the flowers, adding a dot of orange stickles in the center. I think it came out pretty close to what the paper looks like. Hope you can see it in the picture. 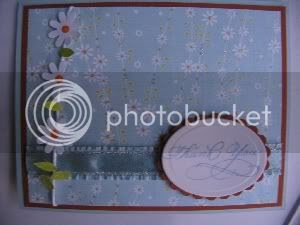 Update on my daughter - after many blue raspberry popsicles and plenty of rest, she is feeling much better.
Posted by Sandra Smart at 7:16 PM